3 April 201129 May 2012
Dinner night one.
If you are hungry you may want to put on a long sleeved shirt at this point as you might start eating your arm when you read about our edible joys.
John King who is a wild man. A wild spaniel owning, father of two. A man is as mad about cooking as we are about eating. He made bread for us arriving. He did. It’s funny the old fashioned idea of men interested in food being fey characters who wear pinny’s. Nonsense. In Scotland they are hearty. hairy man the hunter gatherer types who just love the produce they deal with every day be they farmers, cooks, restaurateurs. So a little homemade bread, with honey and truffle oil from maestro of the loaf John kicked us off as we waited to start dinner. 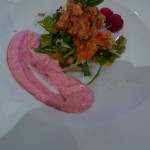 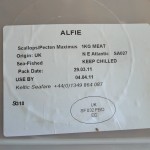 Main course scallops and langoustines. You can see the langos here – alive. A few minutes later

they are boiled and cooling outside with a very optimistic dog watching carefully. Her optimism was ill founded. there was no way her canine canines were getting stuck into these.

You can see from the label they were bought from the guy who runs the boat, the date they were caught was Thursday. And we ate them today. The creamy tender flavour was divine. They are about the size of a fat man’s thumb – but twice as long. Each a substantial mouthful which renders even the noisiest amongst us silent. Reverence to the langoustine.

The scallops are the same deal, bought from the boat, in the tub with the roe still attached but no shell. They are so fresh the smell of the sea wafts from the container, as they hit the hot butter in the pan their sweet aroma permates the air.

Served with a slice of black pudding, locally made by Roddy Butcher – this is not his name but everyone in the area knows him as this as he provides all things edible to the highest standard. He has a butcher shop but supplies fish and other 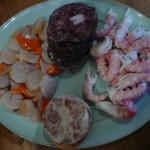 delicacies to locals and visitors alike. As you can see from looking at this black pudding face in – it is just packed with flavour. No great wheels of fat that can be found in a lesser pud – this is award winning stuff. Also on this platter yuo can see the Scottish delicacy the potato ‘tattie’ scone.  Homemade again…recipe later this week. They are perfect with this combo of fishy delights.

Speechless and sated we sat back for a while. But only until david dug out the cheese  mountain and sliced some pieces for us to try.

So cheese poundage from Ian Mellis Cheesemongers was consumed with homemade oatcakes – Donnie says he will give me the recipe to share. We retired to lie flat and sip wine. What the perfect end to the perfect day.

So Dinner 1 in the West Coast. Here for a week. What will tomorrow bring? Well come back same time tomorrow and I will show and tell.