A naked dog is delivered from Spain 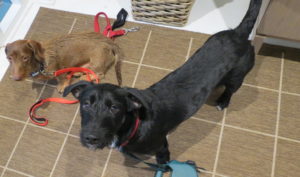 Sunday night 7.30pm standing at the side of the road waiting for our new Spanish hairy parcel to be delivered.

I can confirm this does not enter your head when you click “SAVE” on Facebook when you see a dog that is about to get put down for no reason other than no-one wants him. Sob. Wimper. Snot.

The transport up from Spain had a Messenger Group so we had been able to track their progress and enjoy the photos of other people as they scooped up their own hair deliveries the length and breadth of the country and now it was our turn.

The big white van pulled up, the paperwork was handed over to us, the side of the van slid open and  our new hairy charge“Terry” emerged in the arms of the guy who had driven him – and 25 others – up from the South of Spain dropping them off enroute one and one and two by two. The arc of mongrels.

Beagles, a German Shepherd, a few cute hairy mutts, an English setter – all death row escapees all driving home for Christmas (Cue Chris Rea  – actually don’t- I want to get on with the story -)

The unsuspecting sausage dog was all togged up and  there to meet the van too. 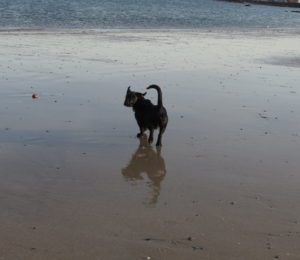 Advice was to walk the new and old dogs around a bit before going in. We followed instructions and watched as Terry – who was taller and longer than he looked during our brief observation online – padded along, sniffing the air with the most magnificent tail, a virtual aerial, with a wee kink on the end swooping back and forward.

God knows how long in the perrera (death row), 3 days in a kennel, 3 days in a van and still he was smiling. A born optimist. A good start.

Once in the garden we let them off the lead and Charlie the sausage, the long suffering husband and I stood and watched as Terry took off like a rocket, running in circles, swooping round, tail wagging, sniffing the grass, running fast and long and as fast as he could, skidding to a halt just before he hit the wall – literally – turning and screeching back again – joyful.

Opening the kitchen door we went in, followed by Charlie then the new boy in town.

Alpha male and female, followed by top (if not small and low slung) dog and then Terry. Following instructions learnt on YouTube from a variety of sources.

We watched as he found and slurped all the water in the dish and then padded about the place having a good look and sniff round glancing at us periodically in case we were angry, upset or liable to throw him out again.  All he saw were cheesy grins.

Thinking ahead – unlike us to be fair – we had taken the precaution of putting a gate – looks like a child gate between the kitchen and the lounge with an additional tiny gate in the middle. Our reasons were two fold.

1. If Charlie found it all a bit much  – being an only sausage up to this point – then he could slink through it and away from Terry for some peace and quiet.

2. We had no idea what Terry would do!  Chew a chair? Crap on the rug? Attack us with his rather magnificent looking teeth? We all needed to be separated if necessary. 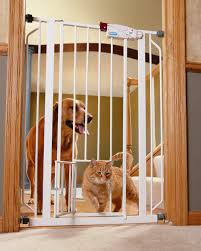 Charlie looked a little grumpy and so to remind him had a mini get out gate like the one pictured here.  I opened it. He looked at it. Smiled. And slunk through in a pleased as punch way which was short lived as Terry – forcing his bony hairy considerably larger self into the considerably smaller aperture – he pushed his way through the tiny gate within a gate too – tada! There he was on the other side too.

I would sell him to the circus as the contortionist dog if I wasn’t already a little bit in love with him.

Tomorrow or first day……I will report back.