So here I go again.
Large mouth.Dog mad.
Heartbroken to see a photograph of a little hairy galoot online that was on death row in Spain because someone didn’t want him anymore. I followed the post for 2 days.
He was at the head of queue for the big nasty jab aka death and so I said “I’ll take him!”
And so ….he is on his way. 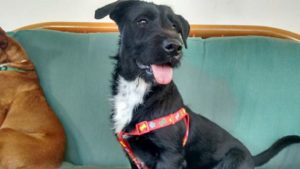 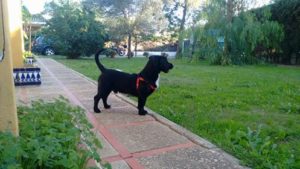 What’s his temperament like? Em….looks waggy but really can’t say.

Instincts having been dog mad since I was born are he looks like a gentle, hairy, cheeky mongrel with an extraordinarily waggy bahookey.. What do you think?

So his year thus far has consisted of… being chucked out from wherever he was and left in the kill station.
Then last minute reprieve sprung from death row.
The following morning off to the vet to have his bollocks removed. Ouch. What a high! What a low! What a shame. All within 24 hours. Gulp.

Next before he could draw breath and work out where the vet was that took his manhood, he was off again, this time to a foster home in Spain til his health check.

Happily he was given a clean bill of health which meant he could travel once his innoculations, rabies and passport is sorted.

And so he arrives here in Scotland on Sunday. No not the paper obviously.

From kennel, to vet, to foster carer, to kennels a 6 hour drive away as the Spanish authorities want to check he is who they say he is. So he stayed for 3 days being prodded and checked again. And now – right now as I write this he is on the pet transport with a host of other wee homelss, unloved dogs being dropped off all over England and Scotland. He will arrive here on Sunday night, it will be dark, very very cold, colder than he has ever imagined, he will be hungry, stressed, scared to death – he has no idea where he is. He arrives with no blanket, no collar, no bed, no real identity.

And so we await. With bated breath. A new lead and collar. A TK Maxx bed tucked into a crate where he can sit and watch his new family before deciding when he wants to come out and say hello. In one corner he will see a suspicious sausage dog whose nose will be very out of joint. In another he will see a big bummed Aberdonian with a biscuit in her hand. We will report back as to how it goes…I have to confess this is a lovely Christmas parcel on it’s way….lets hope he thinks so too……

Wish us luck! It’s going to be a very Terry Christmas.