Day 3 Thalys to Paris. I said Thalys! Honestly your mind. 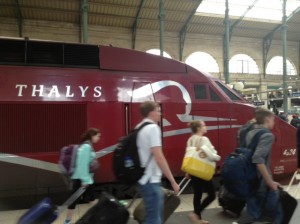 So next leg from Amsterdam to Paris. The Thalys train. The website sold it as a rather groovy train. Ahem. groovy in the 60’s yes. Red velveteen, very Marc Bolan and as you can see…….pointy.

It arrived on time and there was a bit of a rugby scrum when it arrived. There was no rush but tell that to the giant, hairy headed horror who practically rugby tackled my 81 year old mum to get onto the train before her. We gave him the collective evil eye – a terrifying sight – and Mum gave his case a surrepticious kick as we walked past.

There were 16 seats in our carriage. 4 round each table and no room whatsoever for any luggage at all. At all. So in came this Quentin Wilson lookalike man and his wife. They came with the biggest cases in the history of the suitcase manufacturing industry.

As you can see the capsule wardrobe has not yet arrived in their country. Ellie keen to break the language barrier asked if he had his children in there. He laughed and said ‘N o..chocolate’. We don’t know why.  Unperturbed they jammed the cases in blocking us all into our seats.

Then opened the door and in came an Asian family and an American woman. They too had ridiculous amounts of luggage and jammed them in to every shelf, aisle and space not available. Next came the mad red eyed rugby tackler.  There was a collective internal groan as he muscled his way in.  Then trailing behind him , we realised he wasn’t on his own he was with what I would describe as a brow beaten wife and timid child who were interestingly but not surprisingly carrying his luggage.   It was apparent they didn’t want to be with him anymore than we did so I spent the rest of the journey feeling sorry for her and wondering if I could do a quick google translation on a note to say ‘ leave him he’s a buffoon, life can be better’ but as there was no wifi and he was a growling bear with a hernia so I refrained.

Next up a  jaunty hat wearing amusing character from Dublin whose seat was completely obscured by bags. So he perched. “Oh” he said “Health and Safety up to their usual standard’ as by now there was literally no way to get in or out of the carriage. God help someone if they needed the loo or to breathe in a normal human type fashion.  It  was at this point the guard opened the door, realised he couldn’t even step into the carriage due to the log jam of stuff everywhere so we waited his almighty Spanish outrage but he just poked his head in, rolled his eyes,  and departed leaving us pinned in and incredulous.

So that was the journey.

Next instllment Paris to Barcelona – brace yourself Sheila.