Behind the Scenes at The Museum of Scotland

Wow. Last night I as lucky enough to be asked along to the reopening of The National Museum of Scotland. A favourite place to hang out all those years ago w ith Teenwolf when he was a cheeky wee toddler who loved bugs, dinosaurs and fish and it was great to go back and visit again.

The first change is apparent before you even go in. The entrance used to be a the top of a flight of stone steps but the clever architect – a man I will use if I ever have enough money to build my own house – decided the huge storage vaults  below the main atrium  was where he would create the new entrance level.  From this  level you emerge into the atrium level by escalator past a number of exhibits which are mounted on the wall and into the light. This wall is to be a moving changing exhibition. A helicopter, an animal skeleton and other kitsch bits and pieces set the tone.

Arriving up at the atrium level is a real wow. The fish pond has gone, as has the cafe and now there are just acres of marble floor. Last night the place was buzzing with people all gathered an staring round the impressive space. Above us the atrium, and right round the sides large archways leading tantalisingly to the exhibits.

One of the reasons they undertook this refurbishment and redesign was that they had so many fascinating artefacts in store – to the tune of tens of thousands – they wanted to get them out, dust them down and let us all wonder at them. And success  so many more of them now have homes.

The archways are vast and elegant and amazingly were there all along. It just seems the last work to be done all those years ago consisted of  putting in false ceilings and hiding these features in interest of practicalities and not sadly aesthetics. So  under all that chipboard and stuff was a truly beautiful, building. I was so excited I 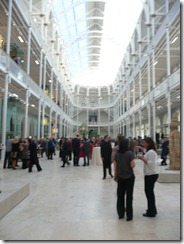 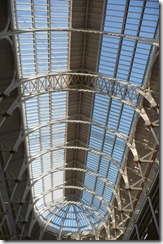 The vast hall and atrium above. Light streams in. And shockingly look! A blue sky! 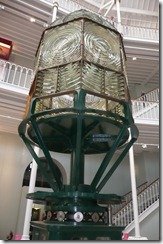 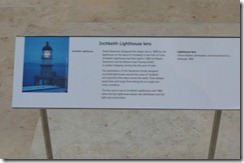 Part of the first ever lighthouse in Scotland – built by Robert Louis Stevenson’s grandpa. Wow. I’ll gie you history. 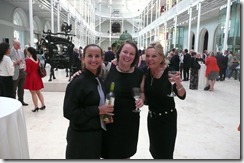 And of course we made friends with the most important woman in the room – the one in charge of the wine! 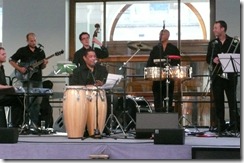 I have booked this lot for my birthday next year – yes well as I said we did make friends with the pourer. Fantastic band!

Japanese drummers kicked off proceedings – the acoustics in the hall being perfect for the booming. We drank wine and listened as Angus Grossarts speech underlined the magnitiude of what has been achieved.  So…..then…..a fabulous band struck up…they wee so like the Buena Vista Social Club that it was hard to leave  but leave we did. Off to The Outsider for supper – the food was fab and the drinks were flowing. Sitting in that muted restaurant and looking out at Edinburgh Castle which was lit up like a Hollywood Set in the evening sun having been at The National Museum relaunch made me feel all squishy and warm about Edinburgh and Scotland.

Aye a real feather in our cap.

Visit it when you can. The Museum – and The Outsider  You will not be disappointed.

Prev post The son has got his hat on - and not a lot else.
Next Post Fat Cat Centrica announce £1.3billion 1/2 Year Profit & they are hiking our bills by 20% !