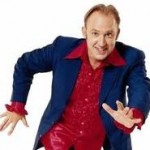 Top one lines from this years Festival – the pefect way to start the week.

“I’ve just been on a once-in-a-lifetime holiday. I’ll tell you what – never again.”

“I picked up a hitch-hiker. You gotta when you hit them.”

“I bought one of those anti-bullying wristbands … I say ‘bought’ – I actually stole it off a short, fat ginger kid.”

“As a kid I was made to walk the plank. We couldn’t afford a dog.”

“Being an England supporter is like being the over-optimistic parents of the fat kid on sports day.”

“What do you call a kid with no arms and an eyepatch? Names.”

“Dave drowned. So at the funeral we got him a wreath in the shape of a lifebelt. Well, it’s what he would have wanted.”

“For Vanessa Feltz, life is like a box of chocolates – empty.”

“Wooden spoons are great. You can either use them to prepare food, or if you can’t be bothered with that, just write a number on one and walk into a pub.”

“Why did the chicken commit suicide? To get to the other side.”

“You know city-centre beat officers… Well, are they police who rap?”

“I’ve got nothing against lesbians. I mean, that’s the point, isn’t it?”

“I was born into the music industry. My dad worked in Our Price.”

“I made a Battenberg where the two colours ran alongside each other. I called it apartheid sponge.”

“I bought a cross-trainer to keep fit. I suppose that it’s not enough to just buy it.”

“Some of my best friends are vegan. They were going to come today but they didn’t have the energy to climb up the stairs.”

“How many Spaniards does it take to change a lightbulb? Juan.”

“Floella Benjamin is in the House of Lords. How did she get in, through the round window?”

“My mother is always taking photographs of me – she said if you disappear tomorrow I want you to look good on the news.”

“I like to play chess with bald men in the park although it’s hard to find 32 of them.”