The first time my name was on the radio was  a birthday request by Stewpot for my 6th birthday. “Mares eat oats and does eat oats, and little lambs eat ivy….”.no it does exist it’s just that I am ancient. From that moment to this, my overwhelming obsession in life has been radio. A medium where you as a listener really connect to the presenter and as a presenter if your doing your job, to your listener. To me the master of them all was Terry Wogan and when I heard the chocolate voiced, cheeky, twinkly eyed Irish man had passed away today there was a tear in my eye.

Sitting circa 1976 on the way to school in Mums old Morris Minor I would turn the radio onto Radio 1 and crank up the volume, the second she stopped at the lights Mum would slap my leg and turn back to the Radio 2 Breakfast program which was then hosted by Terry Wogan. It only took me a while to to realise Noel was just a pretender to the throne (with bad streaks) but at a very tender age I also became a Wogan fan. His gentle self deprecating humour won me and millions of others over to be dedicated fans. 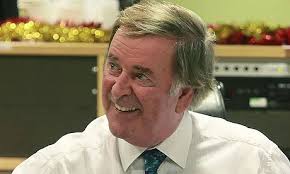 When I heard Chris Evans was taking over his Radio 2 breakfast show all those years ago I wasn’t convinced he was the man for the job. But then who could ever take over from Terry? The day Evans took over he played it very low key and respectful and quiet and there was hope but within the week his volume was up, his me me me style was back at the fore and the memory of that lovely lilting unassuming Irish brogue was lost to our grumpy early morning ears.

Hearing his voice on air on a Sunday was piecemeal indeed but better than nothing. Which is sadly where we are now. 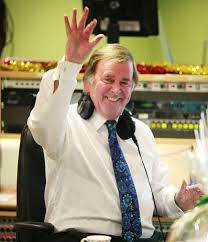 A huge loss. A colossus of the broadcasting world. Anyone who has ever asked me who I believe was the best radio presenter of all time I used to say listen to Terry Wogan. I always will.