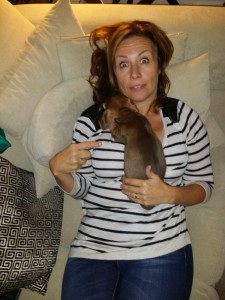 Some may think it a little early after the demise of our dear old souls who were wafted off to doggy heaven just few weeks ago. But me without a dog is like Judith Chalmers without a passport, like Russell Brand without a lascivious look in his eye. Even as a child, a student, a scurrilous traveller I have never been without the companionship of a quadroped. In addition I have never had a pedigree chum. Ever. They have aye been scrappy wee unloved individuals from cat & dog homes, the side of the road, a drain, Battersea, Aberdeen, Edinburgh so at this stage in life as I intend to travel by car a lot all round the world I have employed the services of a wirehaired mini dachshund to be my faithful sidecar rider. I need a compact bijou pal and so I thought I will wait until next year before I take the plunge. 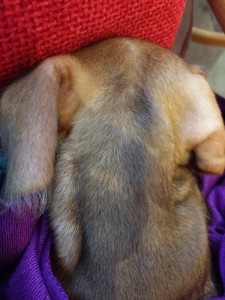 Fate took over as that very day I met a hairy wee scruff called Snook in Aberdeen a stoating wee dog. The next question was where did he come from? The answer was the name of a breeder who I phoned several times and had no answer. Then last Sunday she picked up.

“I want a bitch” I replied. Birds of a feather and all that.

“Daxy boys aren’t like normal dogs “she said “they are very loyal and affectionate – more so than the girls.”
Sceptical I asked her to send me a photo.

On impact of course the heart began to beat a little faster.

“Let’s will drive over and see him and have a chat.” I said to the long suffering husband.

“Of course if we go we will end up with him” he said rolling his eyeballs.

“Not necessarily” I said sounding as convincing as I could.

So we arrived into the home of 14 daxys. They were barking and jumping and squirming. “Quiet” the breeder shouted and they all stood silent watching us with their raisin like direct stares. “Lets hope they don’t turn on us” I whispered under my breath to the LSH who unlike me has not been in the company of the dog breeder madness that we were witnessing. The fact is if I wasn’t married I would like have at least 14 dogs and a few pigs but I chose not to impart that information at this particular moment.
“That’s the Dad” Elizabeth the breeder said pointing at this titian haired beezer. “He’s French”.

Now I am no dog show judge but he was a noble hairy faced wee man.

“That’s the Mum” she said showing me a hairy wee thing amongst the other yappers.

And there’s the pups she said pointing to the corner of the room where a small pen held two leaping pups.
One dog. One bitch. One heart lost. Mine. 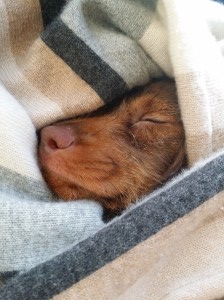 I picked him up. He’s so tiny. And he’s not got any wire hair.

“His fixings are coming in” she said pointing out the small moustache that was growing under each eye. He was a wee bit shy unlike the girl who was running up the leg of my trousers and pushing him out of the way.

We talked about it and as Dave and I looked at each other we knew.

And so…the new adventure begins with Charlie Chorizo Sausage Dog. He is so small if we cut the end of a sock he could wear it as a coat. That’s what I am going to do as he not over endowed with hair yet and clearly the Scottish winter is a hell of a time to arrive in the world. I will write about him again and display my new sock invention coat….but for now……he is sitting on my foot, demanding he is picked up for a cuddle. Hell someone’s got to it. Swoon.