Beginning of an Argyll adventure…

I wrote about my Mum’s 80th – now being a party animal myself I assumed she would want a big rip snorting whizz bang of a do. I had visions of gathering friends from all over the place, hiding them in a dark room until the unsuspecting Pat was taken in at which point they would all leap from their allotted places shouting HAPPY BIRTHDAY and the fun would begin.

This of course is my idea of heaven.
Her idea of hell.
I organised a surprise birthday party for her 70th.
The biggest surprise that she got wind of it and went to Ireland.
Still we went ahead and had a hell of a good do. The only thing missing was the birthday girl and my dad who were in Clifden, Connemarra.

A Jazz band, barbeque and  all day frenzy ensued. We had snoggers on the lawn by 3pm, a woman left her husband after meeting someone she thought was the man of her dreams – he was as a matter of fact the stuff of nightmares she later found out –  the local hairdresser got thrown out for insulting everyone and still the band played on.
So this time it was her call.
What would you like to do?
Go to Loch Melfort. To Melfort House that lovely B&B we stayed in last year was the answer and you can’t argue with that.  So instructions issued. We were off.

20 minutes south of Oban you see a turn off for Kilmelford to the right and off you go. A wonderful wee road undulates along the loch side past a few houses but the main challenge is to keep on the road as your eye is inevitably drawn to the array of boats, yachts and sail boats bobbing in the water and the backdrop of the islands beyond. Not 5 minutes later the sign to Melfort House guides you up a tree lined drive and you get your first glimpse of  the house. Built originally in south facing overlooking the loch with wonderful  mature gardens all around. The door flew open and out came Yvonne & Matthew Anderson, our hosts. 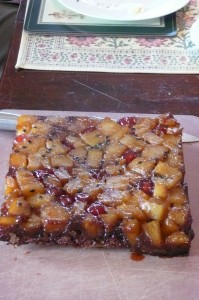 Ushered in and offered afternoon tea and homemade pineapple upside down pudding we exhaled after our journey taking in the breathtaking views of the loch and gardens. Total peace. Shown to our rooms.They have 3.
Mum was the birthday girl so she got the loch suite a room with a bed bigger than my first flat.
David and I got the hill room which was also a sumptuous delight.
After unpacking the sun was still a shining so we walked  over to the nearby Shower of Herring for supper. Which David insisted in calling the Flock of Sparrows. The chef is a real character and had put on canapés when he heard a fellow restaurateur was heading over to eat.
Scallops, duck and no room for pud we had a great time. A couple of bottles of house white and teenwolf, actually sitting at table, speaking and doing impersonations of some of his teachers at school had us in stitches. The next day…is the long suffering husband David’s birthday. Yup the day before the big one.  Gird your loins tomorrow is another day.

ArgyllKilmelfordMelfort HouseOban
Prev post Scotland, the devil, big bird and the elixir of life?
Next Post The Lobster Shack