Prepare your heart to burst.

Well if you are a regular Alisons’ Diary reader you will know that is an understatement. I love the little blighters.

So when I saw this photograph in yesterdays Daily Mail

I had to be physically restrained from getting on the next train to London to rescue the lot of them.

Well living as we do at the moment in a 2nd floor flat without a garden it really might have pushed me over the edge. And the other two long suffering geriatric mongrels I share my life with. Oh and my husband and son.

But look at the little darlings.

Battersea dogs home is where to find them.

I am a great believer in the rescue dog. My first rescue dog Stumpy was from Batterseas Dogs Home.  An idol afternoon spent with one of my flatmates at the time we naively thought a wander through Battersea would be interesting. 1 hours later as we wrestled the very lively Stumpy – named because he had a ridiculously long back and very short legs, he was white and frankly one of the ugliest dogs I have ever seen – and he was on death row – onto the bus.
So the Stump. Well he lived with a house full of Scots and Irish party animals in Clapham until I went North when he came up to Aberdeen with me and was adopted by a pal who lived out in the country. So it was sort of early dog rescue.

When I started reminiscing about dogs and well lets be honest puppies my two scrubbed up this morning in festive gear. Feeling a little threatened you can tell, they did it, because they had to, not because they wanted to. Which makes me love them all the more. 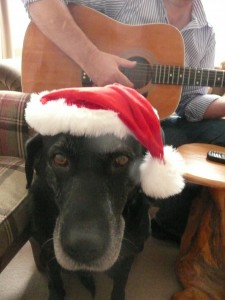 Sammy my current Labrador/half wit lovely old sausage but nae the brightest was thrown out just before Christmas and when we met was a resident of Edinburgh Dog and Cat Home. They reckon she’d been chucked out to make way for a new puppy for Christmas. Well their cruel and stupid decision was our gain. She is a fabulous animal. As is Flora – half dog half womble – found wandering the streets of Edinburgh , pregnant and bald! She was on a drip for weeks and survived to be a mum only after a caesarian saved her life as she had been wrestled to the ground by a huge dog and her pups were about 3 times the size of her at birth.
So what am I saying? Well if you do consider getting a dog go to your local rescue centre. There will be one with huge eyes, a thumping tail and a heart just waiting to fall in love with you and you will have no choice other than reciprocate.

Prev post Groupon - Group off!
Next Post Christmas does your head in? Well it did my back in.