Christmas does your head in? Well it did my back in.

So there we were Christmas Eve running about like dafties. The restaurants were open so tanking around getting stuff sorted for them, Mum arrived up for Christmas with her dog Nellie lurcher so I take on the mantel of entertainer, shopper and carrier of all goods, dogs, bags, food, boxes and bottles (of which there were many).

All’s well until 6pm I am sitting cross legged in the bedroom having commenced the wrapping of the stuff when my back  began to feel a little achy.

So as I bent a little , stretched a little reached for the sellotape – BANG I was down.

After lying for a couple of minutes I managed to roll onto my side and shout in a wholly pathetic voice ‘help’.

I lay still until I as hoisted into bed where I lay cursing and sipping Lemsip – I like the taste it’s my paracetamol guilty pleasure and thought yeh yeh it’s sore but so what I will be fine tomorrow.

Christmas Day good morning. I can’t get up. I can’t move. I am bedded. After a couple of hours I am hoisted but feel awful and am reclined once again.

So Christmas Day the long suffering husband, teenwolf and Mum all jangled and sparkled as planned went off to friends for lunch as  I, the pathetic shark, lay prone by now on the couch with 3 dogs, a packet of painkillers and the remote control.

I started with A Christmas Carol and then watched It’s A Wonderful Life as I lay there alone, with texted photos of my family having a lovely festive lunch, playing charades and drinking I allowed myself a self indulgent snotter. As it took me 20 minutes to crawl to the loo for a pee and about 30 minutes to get back.

Things are a little better and yesterday I managed a temporary returnto vertical to go to a friends party for a couple of hours. The glamorous folks towered over me as I stood in the baggy black breeks, and flat boots with a gate that looked as though I had a wooden stake up my bum. The long suffering husband was dealing with the aftermath of a break-in at Howies so he gamely offered to collect mum and I in the car on his way back.

He did so at about 4pm. He came in, had a drink, said Merry Christmas to everyone and then announced he had to go as he as on a double yellow line.
God you’ve been on it for ages I said you’ll have a ticket. 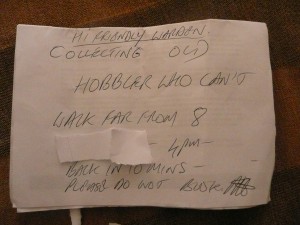 I hope not he grinned.

When I went downstairs in the lift I saw a small gathering round the car window and I hurpled over to see what they were looking at. As you can see the sympathy in this house is well and truly over.