Fairytale location for a perfect getaway. 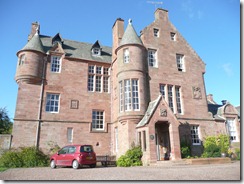 We didn’t have a holiday this year so you can imagine by now we are lumpit, grumpy, stooped and drawn. So when the long suffering one suggested we abscond for a night or two on a laterooms.com special I bit his hand off – which showed exactly how much I needed a break as that was indeed extreme.

The venue, only 40 minutes from Edinburgh, was Cringletie House. It sounds like the set of a Harry Potter movie and when we bowled up the drive we found it to be more Cinderella than Harry,  a red stoned, castellated fairy castle – it’s beautiful. Our room, Jedburgh, was on the ground floor and had great views out over the gardens – I took loads of photos so just have a look if you like, I won’t go on.

The house was built in 1861 and has such a great atmosphere. So many Scottish County Houses – in my humble opinion – try too hard or not hard enough. Either furnished with brand new overdesigned Scottish modern chic or the other extreme they are well  past shabby chic having deteriorated into  more of a  chic hole.  Cringletie is neither. 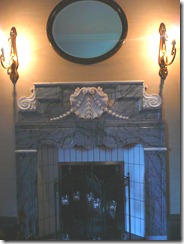 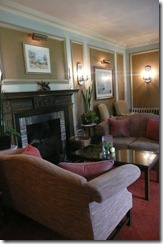 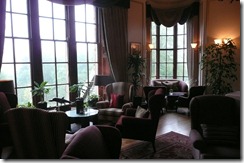 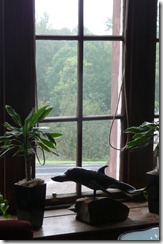 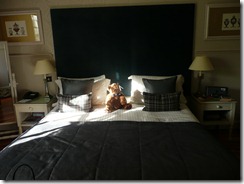 The original features are where they should be, a wonderful collection of art and sculpture both in the garden and the house make it feel like a real home. The bar – my natural habitat – is run by a hilarious character who loves Adele and mixes a great G&T. The food was good too – the young couple of who have just taken over management –Vivienne and Patrick Bardoulet, Vivienne  out front and Patrick  in the kitchen clearly know their business and their onions. Nothing was too much trouble.

I was just shocked that as enthusiastic Scottish travellers we haven’t found it before.

Suffice to say there was an incidence which caused a stramash. At the entrance to the House there is a large plate glass door which opens automatically as you walk towards it, which  is so clean you do have to look twice to realise it’s there at all. This works perfectly unless you are a half haggis half womble dog of about a foot high, aka Flora my Greyfriars Bobby lookalike who  having clocked the rabbits out of our bedroom window earlier when released  for her morning shot off like a bullet. As she turned the corner into reception she spotted  the garden (not the glass door) and cannoned, at full pelt, right  into it, letting out an almighty yelp.  She was fine after a moment gathering herself – in fact she looked quite embarrassed though that could be concussion of course. You can see below she looks barking but happy. 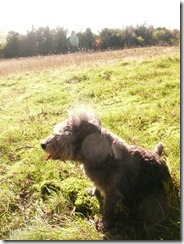 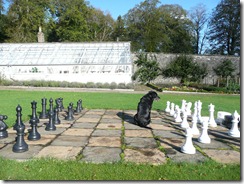 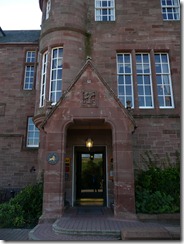 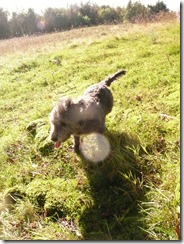 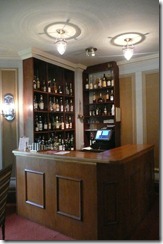 Lovely walks, beautiful gardens, a conservatory, a walled garden where all the goodies are grown with a giant chess set, as you can see we took our own labrador pawn with us  and kids play area makes Cringeltie the perfect place to get away from it all, with dogs, kids or just yourself. There I think you could say that’s a recommendation!