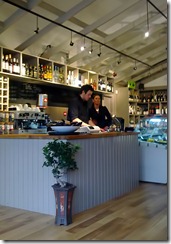 Returning from  Teenwolfs rugby match the hunger was upon us. We had been up in Dollar  and needed some face stuffing to keep us under control.

The other day when my pal was getting her car sorted at Farmers Autocare we popped in for a coffee to a  new gaff we spotted on the main road just passed the big clock on the way into town The Suburban Pantry. As we sat drinking coffee, admiring the surroundings and gazing longingly at the eggs benedict on the menu we agreed it has a great atmosphere and we would love to eat there.  Unusually I controlled myself having had my coco pops not 10 minutes earlier but made a mental note to return soon. And 5 days later  eg today as we headed  in from the Forth Road Bridge I remembered it and screeched STOP!  The poor long suffering husband also low on blood sugar screeched to a halt  then after I  restarted his heart made a fair observation.  ‘ For Gods sake don’t ever screech like that I damn near crashed the car’. It’ll be worth it I said…come this way….. 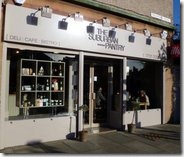 Straight in to a window seat, we realised the  breakfast options finished at mid-day so it was lunch options.  Club sandwiches, more substantial options, salads, snacks, and full main course type fare too. What a choice. As we were just ahead of the bus taking the team back to Edinburgh we decided on two starters each – at the same time.

I had soup of the day sweet potato & rosemary with a hunk of fresh bread and a wee pat of lovely French butter £3.50 and seriously good.

LSH had the cullen skink – a big white bowl with wee bits of new potatoes and sauteed leeks to boot. A rip snorting success with us both.

Smoked salmon and asparagus salad next for me. Lovely salmon. None of your fatty, I have been suspended in a tank with 10,0000 other salmon type salmon, this was a lean mean salmon machine and long, fresh, green asparagus,  rocket and dressing had me happy as a sand girl.

LSH was mighty impressed with his too a bacon, avocado, rocket salad.

A bottle of Fentimans Ginger beer for himself and a glass of iced tap water for me.

Just as we finished, licked our lips and were about to have a coffee the phone went.

‘Where are you?’ a cold bedraggled Teenwolf asked ‘I’m locked out’

‘There in 5 minutes’ we exaggerated, waving for the bill and leaving fast.

So The Suburban Pantry  are licensed, have great food, snacks, breakfast, lunch, deli stuff, the staff are smiley, friendly and that chef certainly knows how to cook.

Open during the day and Thursday, Friday and Saturday nights.  Anyone who opens a place in this climate deserves as much support as we can give them. As they say location is all and if you ever go in or out of Edinburgh you will see it, it used to be an off license, it’s just down from the big clock at Farmers Autocare on the way to Blackhall. Anyway, what am I saying? Oh yes.  Don’t pass by, it’s well worth stopping. Although not immediately on my doorstep I will make a point of going back again and soon. See you there?

Prev post Oval balls are all around - there is no escape.
Next Post My World of Rugby.