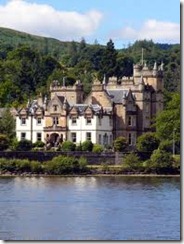 It’s a glamorous spot make no mistake. The majestic Scottish baronial house sitting on the loch side is a stoater. I was here years ago for a wedding so my memories were somewhat faded. Pulling up to Cameron House  it’s impossible not to be impressed.

Arrived, valet parked which is aye embarrassing if you have a car which looks as though 14 people have slept the night in it. But hey ho in we went. Our room was in the main part of the house. Nice. And it was. Up a wee stair tucked away, a lovely tartanny bedroom awaited. Crisp white linen, gorgeous drapes, more cushions than a Come Dine With Me competitor. Lush. Not not me – the ambience. A fridge with a small carton of fresh milk was a nice touch as was the large gleaming white ensuite with bath, shower and toiletries. Luxury. 10/10

Dinner in The Grill house. Right up our street, burgers, steaks, familiar fare. Ordered hot smoked salmon to start. A huge fillet of salmon arrived not smoked as far as I could detect Steak was cast. Béarnaise sauce a joy.Big fat chips which were fine but I do love a frites with my steak said the spoilt brat. but who cares it was of top quality so I ate that. In fact that would have done me, it was mighty filling.

Pud? Not a chance. Packed we were. Packed with goodies.

Wine buff onboard he ordered the it came the wrong year, he ordered another it was finished, third time lucky it so we indulged in a lovely bottle of white. You can tell I am NOT the wine buff.

Whatever it was it was…delicious.

After a good nights kip.

Breakfast is served until 10.30 we arrived about 10am and the locusts had been and gone. The buffet was practically empty. No fresh fruit apart from defrosted berries and grapefruit was left. If they stop replenishing at 10 they should tell you that. So not a great start. We ordered a cooked breakfast. The long suffering husband  ordered kippers. My full Scottish breakfast was what it said on the tin but had clearly been cooked hours before hand and sitting waiting for it’s big moment. I was sorry to disappoint it, but I ignored it.  The flabby congealed bacon, was unappetising to say the least. The tattie scones had absorbed about a pint of fat  but on the plus side the poached egg was good – it had been reheated on the spot .I ordered a soya latte and  a black coffee arrived with a small jug of cold soya milk. Not quite what we meant. Dave’s Cappuccino hit the spot.

Afterwards we slunk off to sit in the big bar overlooking the loch. It was wild outside and this is a fabulous room to sit and gaze out at Loch Lomond  but Radio 2 was belting out to the extent I thought Ken Bruce was sitting at the next table with a megaphone. So we left them to it and went for a walk instead. 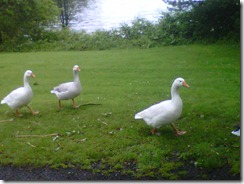 It is a stunning setting, a lovely place to wander around. As you can see there are some feathered residents and the loch is just a gorgeous spot.

That  evening  we went to The Boathouse which was great. At the marina,yet still part of the hotel,  it overlooks all the boats, including the Maid of the Loch which no longer moves but it’s bright red funnel serves as reminder to bygone days. The food was delicious. We had a 1970’s prawn cocktail and then I had a burger. A huge thing it was with cheese and bacon on a focaccia roll. Dave had…drum roll……….another steak.  Equally good. Yet again no room for pud.

The service from start to finish was impeccable. Smiley, helpful, lovely, friendly.

Prev post Mourning for The Daily Record & Sunday Mail
Next Post Found it! How to look 15 years younger.