If, like me,  you go through phases of not sleeping then this tragic story may resonate with you – it certainly did me.

An article in today’s Daily Mail  is about a paramedic whose shifts mucked up her body clock and the result was her sleep went to pot. She became so desperate to get a decent nights kip she bought sleeping pills on the internet. They duly arrived, she took them and tragically died. It is a heart breaking story and one fellow insomniacs can identify with I am sure.

Lack of sleep is something I never suffered until I had my son. Since then I have had periods of sleeping like a baby (not crying and wetting myself though I have had nights like that too – usually due to lack of sleep) and periods of going to sleep instantly then waking 2 hours later in the wide awake club with a head like a toyshop.

I confess occasionally this is what is known as the heebie jeebies brought on by a wild night of boozing with pals , (confession and symptoms here) but more often than not it is just me, my hormones, my red eyes, gazing out into the dark room thinking ‘bollocks I’m awake. again’.

I have gone to the Dr in the past, hoping for a magic wand, potion or otherwise only to be told. Go to bed at the same time.Get up at the same time. If you do wake up in the night get up and do something really boring.  Like?  Go to the gym I find that really boring. No. Stare at the contents of the fridge. No. I find that rather exciting.  So I wake up, think about getting up to do something boring, lie there considering what would fall into the boring category and by the time I  have mulled that over, it’s morning,I feel like the remnants of a half deflated 1960’s bean bag and look a lot worse. 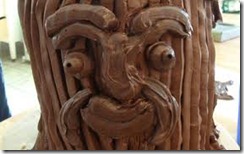 So off to the chemist/local apothecary and I come back lighter of pocket but with a selection of pure lavender oil, valerian, Nytol herbal, Nytol industrial, sleep eeze, Paul McKenna hypno book with CD, eye masks, ear plugs – a by-product of this is  I am now so skint of course I can’t sleep.

Sadly no inroads into the problem. The exception was the Nytol industrial. That worked in fact I was so excited I rushed off out with the dogs happy, lively I had slept!  When I lost sight in one eye. Weird tunnel vision thing,  no pain but I went straight to an optical place and  it seemed it is a side effect that had been noted before so I am not touching that stuff again. 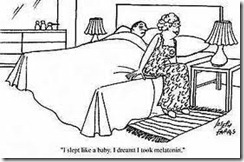 So talking to friends about it – they go through phases too. My pal Fi lives in the USA they have stuff called melatonin – it’s a natural product that works brilliant apparently. I confess I have been tempted to order it on the internet. Why not? Well the tragic story in the paper today which you can read here makes me very glad I didn’t. No matter how deranged lack of sleep makes me, no matter how baggy of face and grumpy reverting to buying drugs off the internet from complete strangers is clearly one way to get one good nights sleep. The problem is that one night lasts for the rest of time.