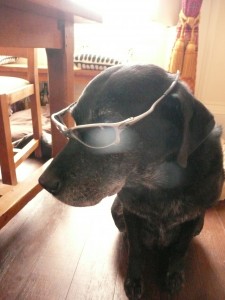 Never underestimate the power of the dog. The intelligence of the dog and the fact that they know far more than they are letting on. Oh yes they do.

Example. At 2.3am GMT Sun/Mon I woke up and flicked my infernal phone/blackberry to see what time it was. As I plooped the button an announcement came in via Twitter ‘President Obama is about to make an emergency announcement from the White House on the matter of national security’ Hello. I thought. This is the part when Jeff Goldblum bursts in and tells us there are bleedin’ aliens all over the place and not to panic but we’re all going to die. Yeh yeh I know it’s the overactive imagination gene.

But with the long suffering husband away for a few days and Teenwolf slumped asleep in the room next door it was up to me to save the world. Or at least find out what was happening before packing our bags and heading for the hills with a bottle of Bacardi a six pack of beer, 20 fags – yeh I am taking up chain smoking again  instantly if the world is going to blow up, my CD’s and the dogs.

So TV flipped on I sat for 45 minutes before the news leaked the USA had the body of Osama Bin Laden. 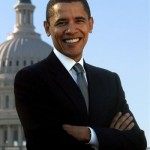 It was at this stage I realised I was awake and thought I might as get even more awake so went down to make a coffee and contemplate what if we had been invaded by bloody aliens. As I walked in through the kitchen door I thought we had when I found the following. 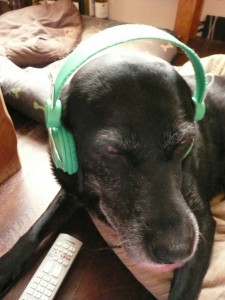 Sam, nice but dim sitting on mission control bean bag 1, with TV remote control under one paw, headphones which must be connected to MI5 or the CIA  on her flappy ears,  wearing the long suffering husbands Tom Cruisesque sun specs which he thought he  had lost. She must have nicked them.  ‘Those are not your  glasses’ I shouted. Her response? To take them off,  walk towards me and sit down whilst demonstrating a rather slow  tail wag inferring I should back right off. Gulp. Labrador goes bad. 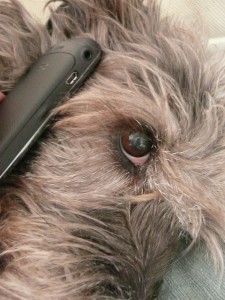 Next I looked to my small  hairy ally in life to  Flora – half haggis half womble who I thought was sleeping but on closer inpsection  I was shocked to find she  also watching the CNN coverage and she was on my bloody mobile phone.Clever these beasties. I’m telling you don’t underestimate them. Ever.

Slinking off to a safe part of the house, a little (no make that a lot) freaked out I checked my mobile phone bill. And the call log suggests Flora is having a relationship with  a dog in Texas. A real Deputy Dawg. I haven’t confronted her yet – I mean look at this face.. Would you?

I think the aliens may already be here. In my house.

Oh just FYI : This is about dogs and their intelligence. So don’t believe that drooling, unconditional love shit. They are at it. Big time.