From Nature To Plate To My Tum. YUM. Castle Terrace. 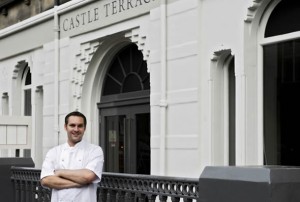 With a husband who started and ran his own restaurant business for over 20 years I realise how spoilt I am to have eaten in some outstanding establishments over the years. When a new one pops up it is with great excitement and anticipation we head in. And although Castle Terrace  has been opened a wee while, it was with great lick lipping and tummy rumbling we went off for a special dinner.

Castle Terrace’s chef Dominic Jack has already won several accolades. The prodigy of Michelin starred star Tom Kitchin, who has supported this new venture, he has taken over the building that used to house Abstract where interestingly the long suffering husband and I had one of the worst meals we ever had. Fact. Happily  bad memories were banished instantly as we were greeted by a delightful French Maitre’ D who  sat us down and quickly delivered our glasses of house champagne. It was our anniversary we were out to celebrate (commiserate) we weren’t sure which – but food would help – of that we were in no doubt.

So a small tray of snacks appeared  in the form of gougere,(delicious but not as utterly melt in the mouth as Roy Brett’s at Ondines!) skelf like home made bread sticks, small cheese puffs which disappeared fast  as we perused the menu.

Surprise tasting menu was  £60 which  we nearly went for but on reading the other options we fell in love.

I had rabbit to start. Crispy rabbit with rabbity bits and bobs on the side. Yumlicious. To give it it’s actual menu billing. Rabbit
Crispy braised shoulder of wild rabbit from Roxburghshire, served on a purée of mini gem lettuce with bacon
£9

Dave ordered up Scallops – they were creamy, sweet and tasted of the sea. The only complaint?  They had been sliced in two and in my opinion they are perfect the way mother nature created them so please don’t slice them –  but hey ho – that’s just me being a whining harpie.

Rabbit for Dave – yes we were dessimating  Watership Down in one sitting. Rabbit
Rabbit from Roxburghshire, wrapped in Ayrshire smoked bacon and served with crisp pastilla, carrots and a caper sauce
£23

We shared the sweet. A miniature work of art…Pistachio soufflé served with pistachio ice cream. £8 It was so delicious and light and liable to float off plus as we were sharing it if I had taken a photo Dave would have scoffed the lot so no photo. Use your imagination x 5 – there you have it.

Wine: Well it was our anniversary we had a Premier Cru Chablis – Mont De Milieu a not insubstantial £54 but hey don’t start. We have been married fro twenty year. 20 years. 10 + 10 yup a nice round twenty. We deserved every hard earned mouthful.

So the man can fry an egg. I confess when someone has the hand of a culinary God in his you wonder if he can live up to the hype. Well he did. He so did.