Check your mans golf bag for bronzer, they’re all at it. 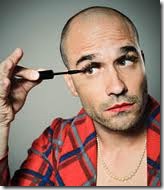 As we appreciate the athletic prowess and let’s be  honest the physical attributes of these geezers – well we do you know – the thought of them  poking their fingers into a beige foundation, or dusting their chops with bronzer before leaving the house frankly gives me the dry boak.

Names he claims like to use slap include Jonny Wilkinson,  Jensen Button &  Steven Gerrard. In fact he claims to have ‘done loads of footballers but they prefer to keep quiet about it’ I am assuming he means putting on make up when he says ‘done’ and of course they would want to keep schtum. After all  it’s hardly the stuff of macho legend is it. Splootering around in their kit bag looking for their YSL Touche Eclat.

My counter argument would be this. 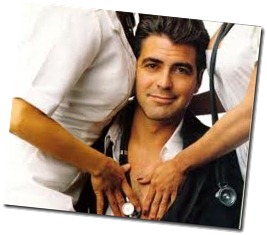 Richard Burton. Oliver Reed. Sean Connery. George Clooney. Men don’t need it.  This picture of George being man handled by  Dynamite and I when we  kidnapped him for charity. Charity was the name of the girl who ran the  local petrol station and what do you get the girl who has everything for her birthday. Answer Clooney.

Anyway, guys get your great hairy ham fists out of our make-up bags and back to the remote control, a can of lager and the inside of your nose.

But before you spiral into depression  reading further into the article it seems this make-up artist (Jordon’s best friend) is launching his own man make-up. So there is a method in his madness but he had better watch it or there will also be a bomb under his car if what he has said isn’t the truth the whole truth and nothing but the truth. So help him dog.

Off to check the long suffering husbands golf bag for bronzer and concealer. I will report back.