Mid-storm it’s Day 4 and wild in the west.

The weather men were right when they said it would be wild. Wild, wooly, windy and wet. So we are indoors. The lot of us. 8 adults. 7 kids. 3 dogs – plus one stray named Rocky who appeared as if from nowhere and carried rocks in his mouth hence his hastily given but highly appropriate new moniker. Rocky. It’s great being  in looking out on this storm. It seems the animals were on to it before us. It is the wrong way round by this gives you an idea of how wild it is right now!

We woke yesterday to a stag in the garden, by late afternoon there were two and by early evening about 12. Hiding from the weather which was whipping round the hills, they found solace in the lee of a barn in the adjoining farm. As the weather worsens I will do a stag head count and see how many more appear. God when they hear we’re having venison for dinner tonight they may well take off fast. 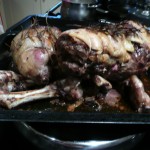 The MacDonalds lamb so it was grown, killed and eaten within a a few miles  of it’s birth. It was divine. roasted, served with dauphinoise potatoes and lots of fresh veg. Nothing fancy. Perfect, tender, juicy. Poor Donnie the chef is now being followed by a steady stream of wide eyed wagging dogs trying to ingratiate themselves and now the children too. He has started holding a baking class for them – the kids not the dogs – in the afternoon. Yesterday they learnt how to make shortbread and chocolate cake. It just makes their parents love them more, knowing they can whip up a mouthwatering shortbread at the drop of a scone sorry hat. I will impart the secrets of scones later as that is todays masterclass.

It’s like the Big Brother House Day 4 – we are not able to get out, it is coming down like stair rods, each window resembles  a fishmongers window with a constant stream of water drizzling down it. The fire is on, the board games are out, the place is so well sorted for this sort of day. It’s a joy sitting in and looking out as the elements throw everything at us, and yet we feel nothing but warmth and an increasing competitive urge to beat the men who are as usual annoyingly keen to win everything no matter what it is.

Amongst all this Teenwolf strides. Supposedly studying for exams inbetween bouts of lounging. He locked himself away today – after getting up at mid-day he went off to work in the long suffering husband and I’d room. I came in and found him and took a photo. The cheeky bugger nicked the photo and put it on his own site. www.teenwolfspeaks.com  If no-one gets stabbed or sent home I shall report back.