Ballater & Scotland aka The Day After Tomorrow

What a carry on.

A nice weekend away in Ballater with some pals and back home for Sunday lunch before a busy week.

It took us over 24 hours to drive home.  Having watched The Day After Tomorrow just a week a go with Louis suddenly we were reliving the whole thing, for real.

Thunder and lightening in the middle of a whiteout blizzard. What in God’s name is going on?

There was snow on Friday yes. We woke up on Saturday and we were a foot deep in it. By Sunday we were 2 feet deep and very tempted to stay put. However as we all had kids, families and jobs sadly it was not possible we had to head back.

Crampons at the ready first step was to dig out the cars.

The men all started striding around in knee deep snow, looking macho,  as the girls directed operations clutching coffees and stroking the over excited dogs.

We set off an hour later. Shaky, slow and slipping.  By Drumoak one car had given up the sump pump –I have no idea what that is – but you obviously need it as  the car had ground to a snowy halt. There was a parting of the ways at Aberdeen. Some went on the A9o – us  and the others went off down the Blairgowrie Road as they were heading west. None of us got where we were going.

By Forfar we were static on the motorway for over 2 hours and no matter what we tried got no information at all. Phones, radio, praying, nada.

No-one knew why we were stopped, how long we would be there or what the heck was going on. Disgruntled travellers got out of their cars, men clenched and despite the horrific blizzards got out of their cars and had a pee as women cursed them for having a more portable toilet arrangment in their trousers and secretly whistled out the window.

Having left at 10.30 we got to Dundee at 4 having done a fair impression of Torvill & Dean in cars on ice. Stopping for supplies and in case we got DVT’s having been in the car for so long we shuffled around in the garage buying chocolate – a sure fire way to cheer a person up.

Here we met a furious red faced geezer told us he had taken 4 hours to get up from Edinburgh to Dundee and the road was now shut both ways. I asked other

wet bedragged and exhausted folk shuffling around in the garage ‘ is the M90 shut?’ No-one knew. The concensus was that surely someone would tell the entire population of Scotland  if the main bleedin’ road was shut. So out we  all went like lambs to the slaughter only to find the queue of static traffic went from a few miles outside Dundee to where? Well your guess is as good as mine. Certainly as far as the eye could see. After an  hour and a half of sitting still we inched forward and spotted a wee road  and decided to turn round go back to Dundee it was dark, blizzarding and we were exhausted. Enroute we frantically phoned hotels to find somewhere to stay. Travelodge full, next? Hilton got a couple of rooms. 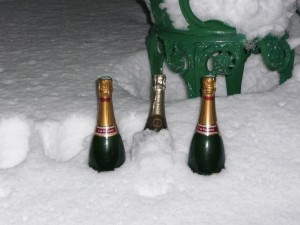 Party! Well we were there for a carry on so God gave us the ultimate ice bucket.

Arrived, drank a large gin collapsed into a slump.(not a sump that was earlier)

Early this Monday morning, the A90 and M90 were still shut  so we headed over Tay Bridge feeling doom as the sky darkened and the snow started again. We were off to the A92.

As we careered along behind a gritter paying heed to the 20mph limit – we all say silent. Frankly it was terrifying to go any faster with lumpy ice everywhere. We were passed by two massive Spar lorries whizzing along in the outside spewing snow and ice over all the traffic tanking along at least 50mph. Silly eejits.
So the main problem was communication, there was none, no up to date reports. No-one knew the M90 was shut for heavens sake. It is the main road from the north to the south of Scotland.. What a travesty.

This is Scotland not Cuba we are used to getting snow but for Gods skae tell us when the roads are shut personally I could have spent my Sunday and Monday doing something more fun than sitting on the side of the motorway waiting for the great God ‘Travel Info’ to grace us with some chat. Canada, Norway and other countries cope. Why can’t we? In defence of the council though the A92 was passable but whoever was looking after the A90/M90 needs a slap. SLAP!

and a little further on….