Hot Brazilians and The Outsider do it again.

Friend Ellie came to stay for a couple of days. Out of her bag she produced a large piece of cake.  Nice.  God it’s pink! I commented. Yes she said,  it was in the shape of a man’s willie this is one of the bollocks. Nice. Instantly we forgot all about it.

Two days on the bollock was missing presumed eaten until just now. Can I have a bit of that? Said pal Anne round for a cup of tea poking her snout in my fridge.
The bollock!
What? She said
I explained.
Nah I’m fine she said dropping it back in the fridge and opening the biscuit tin for soggy Rich Tea.

Off to the Fringe to see Brazil! Brazil! at The Underbelly. It was fantastic! Acrobatic feats defying gravity – the bodies of all the cast members were muscled, taut and so flexible I began to wonder if I am actually human as my chubster frame doesn’t bend and weave like that. The dancing, singing, footballing skills and near enough flying were jaw dropping. The chat about the world cup which was particularly ironic. Did you know the guy to introduce football to Brazil was a Scot! To say they took to it would be a bit of an understatement as they went to win it 5 times – talk about salt in the wound. Typical audience uptight at the begining by the end the heat had risen the crowd was moving to the sounds and sights of Brazil! Apart from the guy next to me who was rigid with fear – a true Calvinist – he was determined not to look as though he was enjoying himself. He was the only one though. Poor sod.
Anyway it kicks off – so what I did there – at 6.55pm For all ages and good eye candy for boys and girls of all ages. ***** 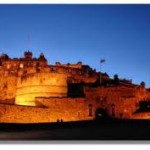 Off to The Outsider on George IV Bridge  for supper after that. Had the minted lamb balls again – I can’t help it – it is such a delicious dish. Thai chicken and prawns for my pal Joanna and Poppy had salmon. Clean plates. Big smiles and as ever great service despite the place being stowed out. The view from our table was right out over the castle which was bathed in different coloured lights for the duration as the tattoo was going on as we ate. As we finished fireworks burst forth from the ramparts. A perfect night in Auld Reekie. Edinburgh – aye could do a lot worse.