Paul Weller – should be going underground

So the most PC man in Britain has just announced his engagement to his 24 year old girlfriend. Well when I say the most most PC man in Britain clearly I exclude  that haircut.  I’m sorry but  I haven’t been able to take that seriously for a long time. In fact perhaps the haircut was an indication of things to come. A man of that age wandering around with a haircut that wouldn’t look out of place on a 24 year old which is exactly where it has been by all accounts.
His new fiancee is 2 years older than his son and in my opinion running off with someone just 2 years older than your own offspring frankly raises all sorts of difficult questions. Paul Weller is 51. She is 24. I am 47 so my equivalent would be a 14 year old boy and as it turns out that is one year younger than my son.  Seeing the photograph of Weller with his bride to be gives me the heebie jeebies. One look at that young line free  naive and optimistic face next to that of a man old enough to be her grandfather come on  what is he thinking! If I ever saw  some old bat eyeing up my son I would have to be restrained from phoning the police, the child protection agency and my local gun dealer. Enough is enough.

Jam albums and Paul Weller albums are hereby shelved indefinately as he joins the ranks of typical bloody bloke. 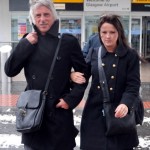